Anyone that knows me well knows that Seinfeld is my shiet. For one, it’s hands-down the funniest show in the history of TV. (I can’t help you if you like Big Bang Theory.) Secondly, and perhaps more importantly, the unspoken, tacit, existential, misanthropic, nihilistic worldview of the show speaks to me in a way unrivaled by any other work of art–save for most things Woody Allen has done (including his collection of short stories), and Albert Camus’s The Stranger. (Here’s a fun fact: ever notice any similarities between Seinfeld‘s last episode and The Stranger? It’s no coincidence. The episode parodies the book.)

Well, recently I was watching an episode from Jerry Seinfeld’s latest project, Comedians in Cars Getting Coffee. Great as the concept for that show is, it doesn’t hit me in a way the abovementioned works ever hit me–but nor do I think that was ever Jerry’s intention. It’s just a show in which you get to watch two people eating food and driving in a car. There’s not really that much to be moved by. 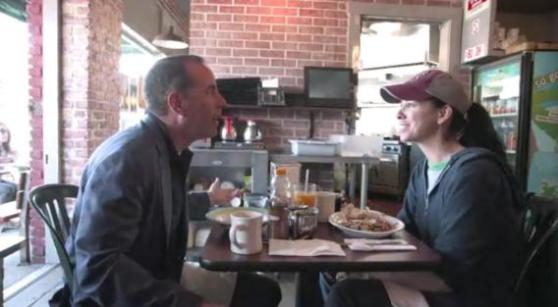 That is, until I watched the episode from Season 3 featuring Sarah Silverman, specifically the below dialogue (there’s no background or scene that needs setting up; the two of them are just sitting at a table eating their food and chatting):

SS: I went through a terrible depression. I remember my step-father asking me, “What does it feel like?”

Jerry, instead of replying to Sarah, turns to the waiter.

JS: Excuse me. May I have some half-and-half?

Only after this very important request does Jerry acknowledge Sarah.

SS (upset): Of all the stories! “I went through a terrible depression–” “Excuse me. Can I get some half-and-half?” Was it that much of an emergency?

And here’s where my man J-Sein drops the fucking bomb, one of the dopest lines I’ve ever heard from anyone in any place at any time.

JS: In the comedian’s view of life, those things are kind of equal.

Those things are kind of equal? Depression and half-and-half?